skip to main | skip to sidebar

Sunday afternoon I was struck with the intense desire to eat mass quantities of pizza. Now I don't get into snotty vegan trash talking, so I wont talk about the locations themselves, but I will say that the vegan pizza options in Philly are good only because they are vegan. They do not satisfy my cravings for serious pizza. It probably has something to do with the fact that I think that the pizza in 90% of this country is terrible and not worth paying for. This post is not so much about sharing a recipe as it is about sharing an adventure.

I already had some left over fra diavlo sauce from last week, so that was all the push I needed. I set off in the gorgeous Sunday sun, in search of ingredients. A stop at some Italian Market veggie stands, whole foods and a pizza place that has decent crust, yeilded marinated artichoke hearts, spicy olives, zucchini, red onions, fresh raw dough and Follow Your Heart soy cheese(I know that I talk a mean game about not wasting money on pre-packaged foods, but this stuff is awesome and totally worth shelling out a little extra cash for.) I then headed right home and got to work. All told I spent maybe $20 on ingredients for two huge gourmet pizzas.

You will notice that I bought dough from a pizzeria, instead of making my own. Not all pizzerias will sell raw dough, but some will. Having a good relationship with the owner certainly helps. Most of the time I do make my own dough, but I was more interested in spending the afternoon walking around in the sun, then fussing with dough. If you want to take a shot at making your own, I use Peter Reinhart's recipe from his book, The Bread Baker's Apprentice that I found in the 101 Cookbooks Blog

First I stretched the dough out and set it in sheet pans, which I then covered with a damp towel to rise a bit. I prefer a pan style pizza. I like how the edge crust rises up nice, and the under crust is crispy. My face is covered in this picture, not because I care that anyone knows what I look like, but because I look like a total goon. It is a good picture of dough stretching though. 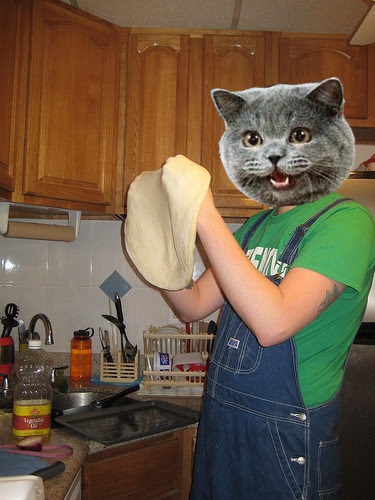 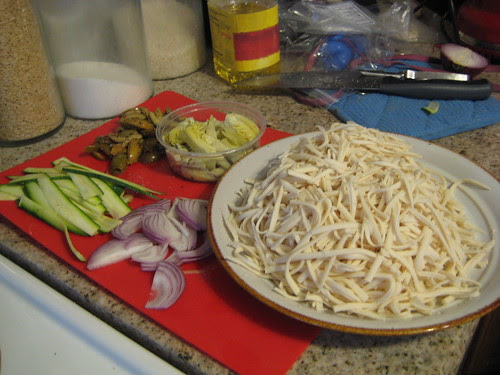 Once the the dough had set for about 20 minutes, I got it ready to hop in the oven. I made two pies:

One White -
Crust smeared with:
1/2 head of garlic, 1 tbsp olive oil and the ends of the soy cheese that got too small to safely grate. Put all ingredients in a food processor or blender and puree into a paste.

One Red -
Crust smeared with: Left over Fra Diavlo sauce, but any left over pasta sauce would work ok (as long as you made it your self.)
Topped with: Veggie burger crumbles, spicy olives and soy cheese.

The red pie waiting on deck 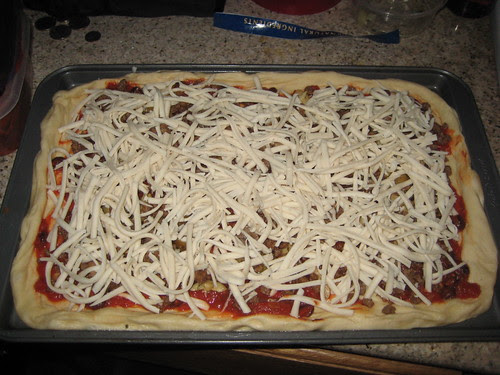 The white pie just about firm enough to come out of the pan and finish baking. 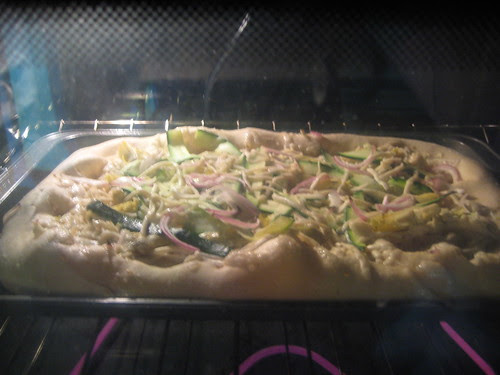 A plate of amazing 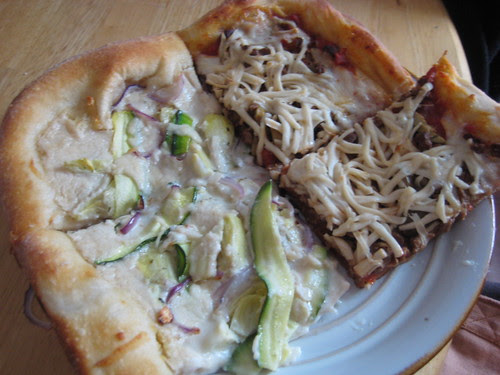 A first person view of the best moment of my year. 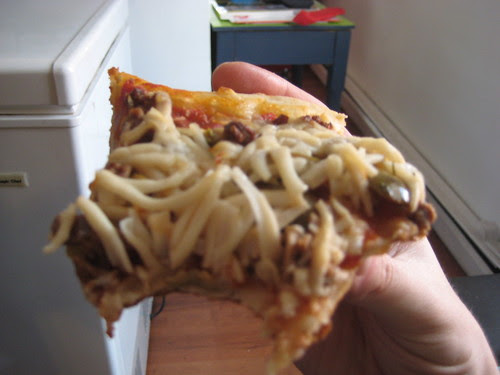 ArtieKGB
I have been a vegan for about 14 years now, it was my new years resolution in 1997(still the only resolution I have ever kept.) I think that the main reason I have been able to stay vegan for so long is that I cook for myself every day, using regular ingredients from the grocery store and don't rely on exotic substitutes or pre-packaged food.